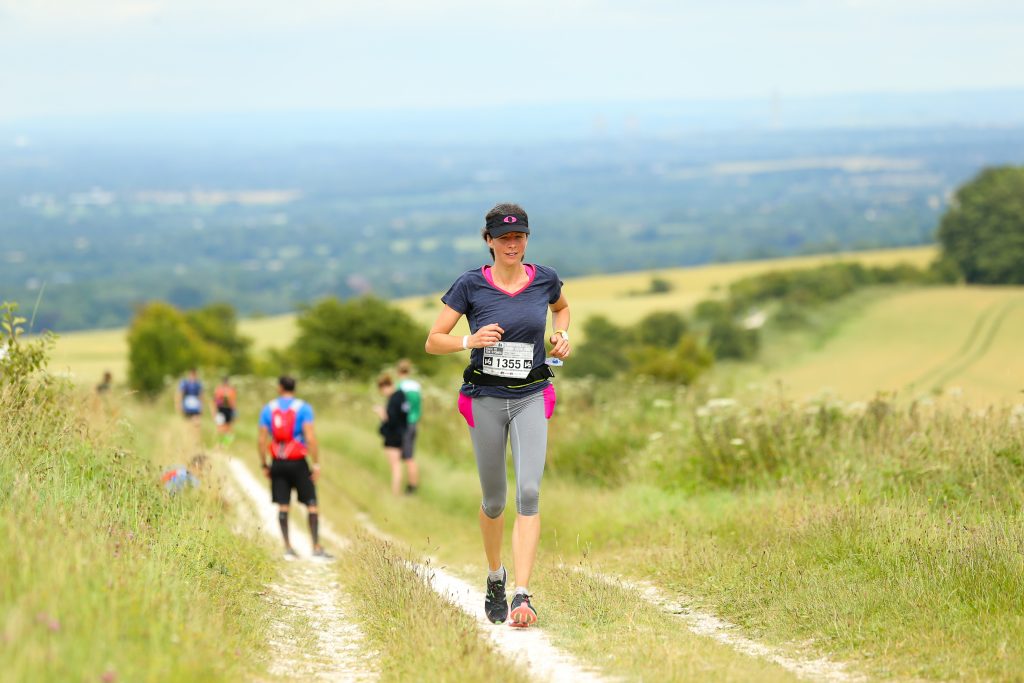 Race to the Stones takes on 100km of the glorious 140-km Ridgeway National Trail. Starting at Lewknor in Oxfordshire, it’s a real journey through time, with over 5,000 years of history scattered along the undulating chalk escarpment, including the Uffington White Horse, Neolithic Long Barrows and – of course – the finish at the World Heritage Site of Avebury: home to the world’s largest stone circle.

I didn’t have a lot of time to prepare for the race, only discovering I had a place with about 6 weeks to go. I decided had to fit some more miles in somewhere! My training had been pretty consistent, with a marathon in my sights later in the year, but my long runs were no where near long enough. I kept my daily runs at around the same distance but upped my mid-week run to 16 miles and my long run to 20+. My biggest day was 30 miles – split into a morning run of 25 and an evening 5. As the day approached I started tapering to allow my body to recover as much as possible. It wasn’t perfect but I felt like I’d fitted as much as I could in the time I had. Running, as always, is such a fine balance between enough and too much.

As well as being the furthest I’d ever run – by nearly 20 miles – RTTS was my first race since our youngest child arrived. My first race, in fact, since the London Marathon  in 2013. I’ve really missed it – racing, whether running, adventure racing or triathlon, has always been a big part of my life – and I couldn’t wait to be back. RTTS seemed like a perfect first race back in many ways too, with no PBs to beat and, I hoped, a finish before the kids’ bedtime. I also liked the race organisers’ aim to encourage more women to take part. Running is such a great sport for time-strapped parents and I know it’s helped me through the challenges of being a mum. I also believe it’s really good for the kids to see both of us competing and they love coming along to races and getting involved with cheering on the runners. I had a few concerns though, the main one being whether my body would withstand 100km with so little specific preparation. But there’s only one way to answer a question like that….

Being members of Trail Running magazine’s test team we’re in the privileged position of being able to try out a lot of different kit. I’m relieved to say that one of the things I got absolutely right for RTTS was my kit choice, and if I had to do it all again tomorrow I wouldn’t change a thing. Here’s my kit list:

Because RTTS is so well-supported, with aid stations every 10km or so, I went with a waist pack rather than a vest/pack as the weather forecast was for hot and humid weather and I wanted to be as comfortable as possible. Despite only having 1 litre of storage in its main compartment, the Montane VIA Bite 1 also has mesh pockets all the way around the waist belt. With this and the clever pockets in my Raidlight tights, perfect for carrying a soft flask, I easily had enough space to carry everything I needed, all with super-easy access. The Runderwear delivered exactly what it said it would – no chafing! I wore my super-light Adios shoes that I do all of my training and racing in. They fit my feet perfectly, have a surprisingly stiff sole that protected my feet from the gravelly trail and, most importantly, I have utter confidence in them.

Race morning dawned bright and extremely early. After less than an hour’s sleep thanks to a restless two-year-old and a looming work deadline I crawled out of bed at 3.30am and was away by 4. The finish at Avebury is pretty near where we live so it wasn’t long before I was joining a long line of nervous runners boarding the coaches to take us to the start. Everything was impeccably organised, a theme that continued throughout the day. The start was buzzing: people were everywhere, there was music and commentary and registration was smooth and efficient. I sorted out my kit, drank coffee and rubbed coconut oil into my feet, enjoying the sights, sounds and smells of the day. My nerves faded, replaced with an overwhelming feeling that I was incredibly privileged to be doing this: to have Sim’s support; to be fit and well; and to have a whole day ahead of me, in a beautiful place, with nothing to do but run.

At exactly 8am we set off: a long, brightly-coloured line moving along the trail that snaked away into the distance. The course is unrelentingly undulating. There are no big hills, but not much in the way of flat running either. The trail rises and falls with the escarpment and we fell in with its rhythm: walking the uphills, trying to relax on the downhills. I started too fast and by 20km was already hurting, a worry as I regularly run that far in training. Perhaps it was lack of sleep or not enough of a taper. The most daunting moment was passing the 20km marker and realising I still had 80km to go. But it’s funny – not all kilometres feel the same. That’s a big lesson I learned from running my first 100km: don’t be scared of the big numbers. Don’t let them get to you and psyche you out. It’s much easier to simply focus on running all day, letting the hours pass rather than obsessing about distances and splits.

The day gradually got hotter, with the sun reflecting blindingly off the chalk trail. But I wasn’t the only one suffering – all around there was the amazing camaraderie of the other runners. It made me realise that nowhere is it more true that strangers are just friends waiting to happen than in long-distance racing, where strong bonds are forged between random strangers who happen to end up moving forward at roughly the same pace. All around there was encouragement: from the other competitors, from the race crew who smilingly offered food, drink and assistance at the pit stops, from the folk who lined the course and cheered us on.

I’ve run enough ultras in the past to know I need to eat regularly and eat real – gels and energy drinks don’t work for me over anything more than a marathon. Fortunately there was plenty of choice, and I stuck with bananas, the amazing fresh orange segments that I couldn’t get enough of, flat coke and water, along with some High5 Protein Snack bars I’ve recently discovered. They pack nearly 300 calories into a bar, so just a small bite is enough to keep you going for a while and all-natural ingredients (nuts, seeds and fruit) still taste nice however far into a run I am.

The 50km point was definitely one of the toughest bits. You can do RTTS as a single 50km or over two days as well as the non-stop 100km option I went for, so there’s a big finish gantry and marquee at half way. Running through the ‘finish’ was a bit depressing, however it was incredible to sit down in the shade for a while with a bowl of pasta, bemoaning the fact we still had that to do all over again with some fellow runners. I arrived feeling like I’d never manage the second half, but left feeling a lot more positive.

As it turned out, the second 50km was in many ways easier than the first. At least the big numbers were reducing now. With 40km to go I finally thought I might be able to finish – ‘only’ a marathon to go and I know I can run one of those, even at the end of an Ironman. I had a bit of a low at 80km, sleep deprivation, heat and the sheer length of time I’d been out really getting to me. At one point I nearly dozed off on my feet. I sat down at the final check point with only 11km to go, had a cup of tea and a banana and rang Sim. It was so good to hear his voice and the kids happy in the background and was just the boost I needed, and I ran the whole of the last section, longing to see them all waiting for me at the finish.

In the end I crossed the line in a bit over 13 hours: longer than I’d hoped but with a lot of lessons learned. I definitely started off too fast and was overtaken by a lot of women between 80-90km, all of whom had paced far better than I had. Oddly I think I could have pushed harder – post race I didn’t have any soreness and only one tiny blister. I was back running around the Lake District without any noticeable effects only three days later. I think the fear of the big numbers and the huge unknown of whether I could run so far meant I looked after my body almost too much. I also need to prepare better, with more long runs, more of a taper and – ideally – a good night’s sleep before the race. But, overall, it was an incredibly positive experience for my first 100km – and a big confidence boost for the next one. Massive thanks to all at Threshold Sports for brilliantly organising an excellent race that I’m sure has encouraged many, many people to give ultramarathon running a go and discover they’re capable of far more than they imagined.