On Saturday 10th June I lined up with several hundred other runners and walkers to take part in the Heineken Race to the Tower, the first of the three races in the Threshold Trail Series – read on to find out how it went. Next I’m running Race to the King next on 24th June and then I’ll be earning my hat-trick hoody at the Dixons Carphone Race to the Stones on 15th July. 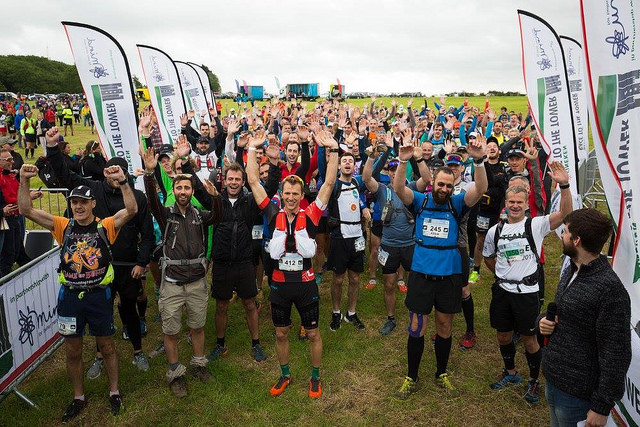 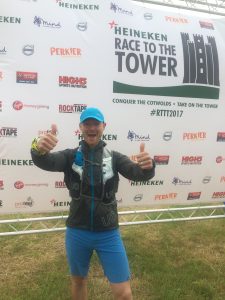 I arrived at the start of the Heineken Race to the Tower early,  parking and jumping straight out to go and register. I needn’t have worried – registration was quick and easy and I headed back to the car to drink coffee and sort out my kit.

The 52 miles of the Cotswold Way that lay before me were the the furthest I’d ever run in one day. The start area was buzzing but it was nice to sit on my own well away from it all for a few moments and remember the hours of training and preparation that had got me there. I felt ready and I trusted my kit. There was nothing left to do but get going. I put my waterproof on to keep me warm and headed over to join the gathering crowd at the start.

At just past 0800 I set off in the first wave of the day, chatting to the other racers about the race briefing – would it really be that well marked (it was) and were there really 174 gates (there were)? It was dry and warm enough to be in a t-shirt and shorts so I stashed my waterproof in my brand new Ultimate Direction TO race vest. I know the rule about never trying anything out on race day and I hoped it didn’t rub.

My plan was to run at about 10 minute miles and to stop at all the aid stations to eat and drink; I hoped this would get me in somewhere between 10 and 11 hours and I thought I was ready for that. Only time would tell.

The first few miles were great, jogging along easily and loving the scenery. The Cotswold Way runs along the Cotswold Escarpment for 102 miles from Chipping Campden to Bath; our race started near Stroud in the southern half and headed north to Broadway Tower. I got into an easy rhythm, running with a chap I’d been chatting to at the start – coincidentally another Mr Benson – and enjoying the terrain. The open ridges offer amazing views across classic rural English scenery, punctuated by points of interest like the Devil’s Chimney, said to be the gateway to where the devil lurks below; the ruins of Hailes Abbey; and Studley Castle. Off the ridges the trail descends or climbs through beautiful broad-leaf woodland, skirts the edges of open farmland or crosses mature parkland. It never seamed to be flat but it felt like we were running it the right way, walking the steep climbs and then being rewarded by long, runnable descents. 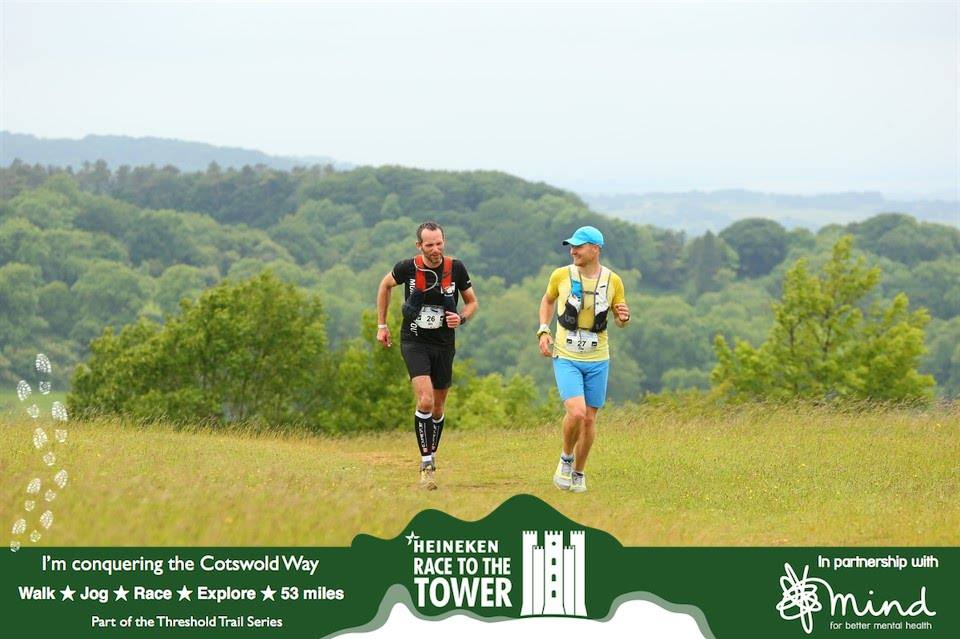 Copyright Heineken Race to the Tower

The first aid station was exciting: so much to eat, so many different drink options; we still felt great and knew we needed to eat, so we did. Peanuts, crisps, fruit, flat coke and water all felt like an excellent idea. I ignored the energy drinks and bars as I assumed that I wouldn’t want too much sweet stuff and I had a couple of gels with me anyway. We carried on even more impressed with the organisation of the race – the signage was excellent, route finding was easy and the aid stations were well stocked – perfect!

At about mile 20 the other Mr B started to have a tough time – he was still running but I could tell he was feeling it and I wondered what it meant for his race. I’d been enjoying running with him and we seemed to be comfortable at the same pace so I hoped it was just a bad patch and that he’d be fixed by the half-way point. We stayed together and arrived at the marquee at the marathon distance. I was pleased to see we were still on for about 10 hours. 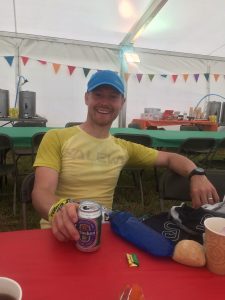 A cheeky Heineken 0.0 at half way

Sitting in the marquee and relaxing I still felt fine and enjoyed a cup of thick vegetable soup, a buttered roll and a cup of tea. I tried the Heineken 0.0, which tasted great but felt wrong somehow… Perhaps that’s testament to its realistic lager taste. Mr B was still feeling ropey but he seemed to be recovering with the food and rest. I think he was a bit worried about feeling bad so early on. Dragging ourselves back onto the course we carried on still maintaining a steady sub 11 hour pace and were soon both feeling good. We picked up the pace a bit, probably my first error, but it felt good at the time and we soon entered the next check point.

Then it all fell apart – I’d decided to only carry one 500ml soft flask, thinking I’d drink plenty at the aid stations and the flask would be enough in between. In reality it was hard to drink much at one go so I didn’t drink enough at the check points. The day was heating up and it often took at least an hour and a half between check points. I didn’t recognise it at the time but I had started to get dehydrated on the long leg to the half-way point. I didn’t really manage to get back from this and soon afterwards I started to feel sick. I was struggling to keep up our pace, especially on the flatter sections and slight downhills. I still found walking uphill OK but I had to drop my running pace and it felt horrible. Mr B had perked up considerably since half-way, so it was now him looking after me, encouraging me and pointing out my hydration error. 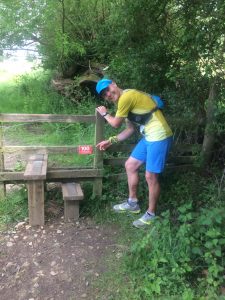 Gate number 100 – putting on a brave face at this point

We eventually got to pit stop 6 and I dropped gratefully into a chair. I was genuinely still loving being a part of the race but wow I felt rough! This is where I really experienced the excellence of the pit stop crews; they were good all along but it was here I really needed them. They brought me tea and orange slices, re-filled my water bottle and chatted enthusiastically at me. Mr B saved my race by finding an extra water bottle for me for the next monster 9.5 mile leg, so I now had about 1200ml of water. I think I should have been using electrolyte tablets earlier as well, so in Race to the King next week I’ll carry two 500ml flasks and use electrolytes in one.

I still felt rubbish when we left the checkpoint but, as Mr B helpfully pointed out, I’d feel rubbish for less time if we started walking rather than sitting at a checkpoint. At this point I was hoping for uphill; walking felt so much better than running and no one was running the uphills. The extra liquid I’d managed at the aid station was helping and I was soon able to run the downhills again, admittedly with a bit of encouragement.

I managed about 6 miles and then decided to try a caffeine gel. I needed to eat and although I still felt terrible I hoped it might perk me up and that the quick sugar hit might help. It absolutely didn’t. I wasn’t actually sick but I was fighting the last few miles to the next checkpoint. Again I collapsed into a chair and was well looked after, tea was great, orange segments good but I couldn’t eat anything else.

By this time and at my current pace I would be lucky to go sub 12 hours, far short of my pre-race target, but at that point I was happy with that. It was much hillier than I had expected and I felt that I’d learnt a lot about nutrition and hydration. As long as I can convert this to a better time at Race to the King I’m happy with it being a learning experience.

By now we had been joined by the other Mrs B (not Jen), who was also running the race. I persuaded my new friend of 48 miles to drop me here – after his wobble at 20 miles he’d been really strong and was looking good for the last 6 miles, whereas I was expecting to be slow. He promised to see me at the finish line and they set off together at a run. I walked for a bit, phoning Jen and the kids and chatting for 10 minutes. This really helped, taking my mind of the race and cheering me up. I also realised that my transfer bus was due to leave at 2000 so I had an hour and a half to finish – the race was on.

With no option but to run I went for it and managed quite well, almost catching the Bensons in the pretty village of Broadway. The 3km to go sign was very welcome but the 1km was far better! I had 20mins of hard hill walking to the finish at the tower and I finally crossed the line in 11:48, 49th place. 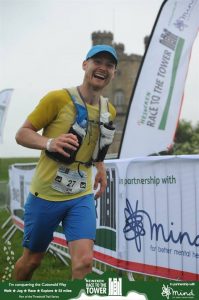 Copyright Heineken Race to the Tower

I didn’t have long at the finish but again the staff were brilliant, fetching my bag and assuring me that they would find me as soon as the bus was ready. I changed and climbed stiffly aboard the bus, sinking into the cushioned seat. I still felt sick but was very, very happy to have finished.

Looking back on my race with a couple of days’ rest and my first recovery/training run under my belt I’m actually really happy with it. I made some mistakes with hydration and nutrition but I can absolutely learn from them: I’m going to carry more food in the Race to the King and make sure I start eating earlier. I’ll also drink less caffeine and more electrolytes, carrying two 500ml flasks instead of one – I don’t have to fill them both for every leg if I don’t need to. Kit-wise the brand new race vest worked perfectly (phew!) as did the rest of my kit and I finished with no injuries or blisters.

My aim is to get out for a few gentle runs between now and next weekend but I’m concentrating on resting and recovering rather than worrying about mileage.

I’ll be posting back here after Race to the King on 24th June with my next race report and preparations for the final race in the series.