Fellraisers are Salomon’s hugely-popular lightweight trail shoes. We love running in them but find they struggle with full-on British mud. Sim was delighted to test out a pair of S-Lab Speeds recently – they’ve been designed specifically for slippery, wet fell running. But are they worth the extra cash? Here’s his verdict:

I’m based on Dartmoor at the moment so I can run straight out of my door and onto the fells. In fact my shoes don’t need to cope with the road at all; I actively avoid road to keep the tread of the shoes sharp and grippy for as long as I can. It’s been very wet recently and my training runs follow sheep-cropped grassy paths which can be very water logged and slippery. My favourite run also includes some very muddy technical single track and really rocky sections. There are some steep ups and downs and plenty of bog to run through too. It’s a really good place to test a shoe’s handling and grip. 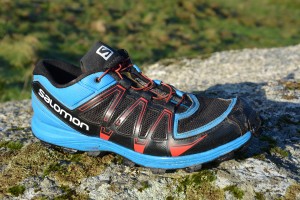 The Fellraiser is billed as a “low, lightweight and fast-drying trail shoe with aggressive tread for training in muddy and wet conditions”. They sounded perfect: I wanted a grippy but comfortable shoe that would cope well in the wet. They also sounded like reasonably good value at £90 which is important for a training shoe. 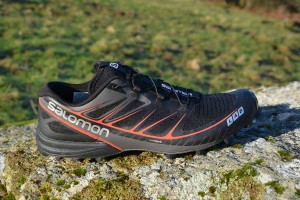 The Speed is “athlete tested in the British fells and built for speed, this is the referential racing shoe to move quickly across the most demanding wet terrain”. These sounded exciting and fast, but would they really be £55 better? I was hoping for a lighter version of the
Fellraiser which I could use for hard, fast running, both training and racing. With the hefty price tag I was looking for a really well-constructed, high-performance shoe too.

First off, the looks. The Fellraisers come in a nice blue, red and black design or a slightly more subtle black and orange for men, or a lighter blue and black or a red, pink and black version for women. They have a bold Salomon logo down the side and on the tongue. They’re a nice-looking pair of shoes, if a bit on the chunky side. The S-Lab Speeds on the other hand look fast: a smooth, black upper with flashes of red and bold silver logos looks super sharp. The design and fit is unisex.

Both shoes use Salomon’s fell running last but the Fellraiser has a slightly more generous fit, with a wider toe box and a deeper heel cup. This, combined with a bit of extra padding, makes the shoe feel softer and more instantly comfortable on my foot. The Speed is definitely designed for racing: the fit is closer and it feels like my foot is almost part of the shoe. Despite both being the same size, I can wear any of my running socks in the Fellraiser, whereas lightweight socks work best with the Speeds. My feet are fairly narrow, so if you have wide feet you may need to size up half a size in the Speed but you will probably be OK in the Fellraiser. I’d definitely recommend trying them both on before you commit.

Both the Fellraiser and the S-Lab Speed have aggressive Contagrip sole units. The tread pattern is similar with a forward facing chevron pattern on the fore foot which is designed to give good traction up hill and rear facing chevrons on the heel section to aid breaking. The spacing of the tread is similarly wide on both shoes which helps reduce the amount of mud they pick up keeping the shoes lighter and the grip free to work. The Fellraiser has shaped lugs around the edges which look like they should improve grip when traversing on slippery ground, but I actually find the Speeds have better grip and its chevrons are all the same. The Speed feels like a softer rubber compound, giving better grip on rock than the Fellraiser. This may mean they wear out faster, but time will tell. 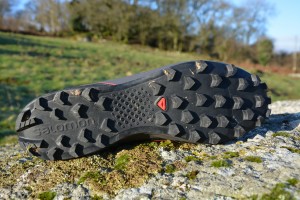 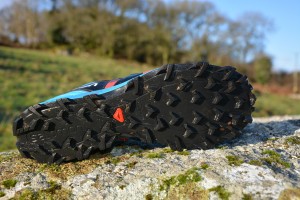 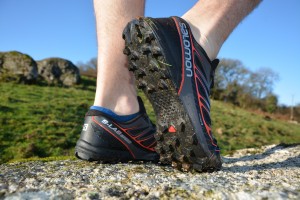 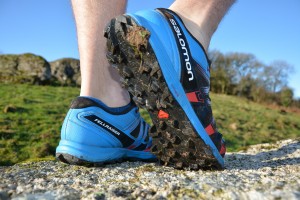 The actual sole unit on both shoes is one piece, quite thin other than the tread and glued straight onto the midsole. Both shoes have a similar toe bumper where the sole wraps up and around the front of the shoe and incorporates three aggressive toe treads. Importantly the forefoot of the Fellraiser is about 1cm wider than the Speed and the heel of the Fellraiser is about 0.5cm wider; this makes the Speed feel faster and more accurate to run in. The smaller contact area may help improve the grip as it increases the pressure on each tread and helps cut through mud to the grippier surface underneath.

I had the Fellraiser first and I was very impressed with the grip when running up and down hill on grass and in mud; they weren’t as good on wet rock and I slipped a couple of times when traversing steep slippery slopes. The sole felt protective and consistent and I have been running in very wet and slippery conditions. The Speed is amazing; it’s similarly good up and down hill on grass and mud but they corner like they are on rails, traverse confidently and grip well on rock. I feel like I can happily run steep, technical, rocky trails faster in the wet in the S-Lab Speeds than I can in the dry in most other off-road shoes I’ve worn including the Fellraiser.

Both shoes use an EVA midsole to provide shape and cushioning and both manage to create a comfortable ride. The Speed has a fairly low 4mm drop from the heel to the toe which adds to the racy feel and confident ride. The Fellraiser is still quite low with a 6mm drop but the added depth of drop and a thicker midsole with a bit more cushioning is noticeable and makes the Fellraiser feel a bit more comfortable and forgiving. I think that this difference means that I would choose the Fellraiser for longer runs because they are a bit more protective and comfortable.

The S-Lab Speed’s minimalist insole simply provides a bit of extra comfort; it’s the same thickness in the forefoot as the insole in the Fellraiser but less structured and a bit thinner at the heel. The insole in the Fellraiser is made from Ortholite foam, with a shaped heel cup which holds my foot well. Although they definitely add comfort, the big downside of the foam is that in really wet weather it soaks up water like a sponge. I have to take them out and leave them on the radiator overnight if I don’t want to start out soggy in the morning, whereas the insole in the Speed dries quickly even if left in the shoe. The Fellraiser’s insoles weigh 10g more each than the Speed’s in the dry, and this must increase considerably when wet. 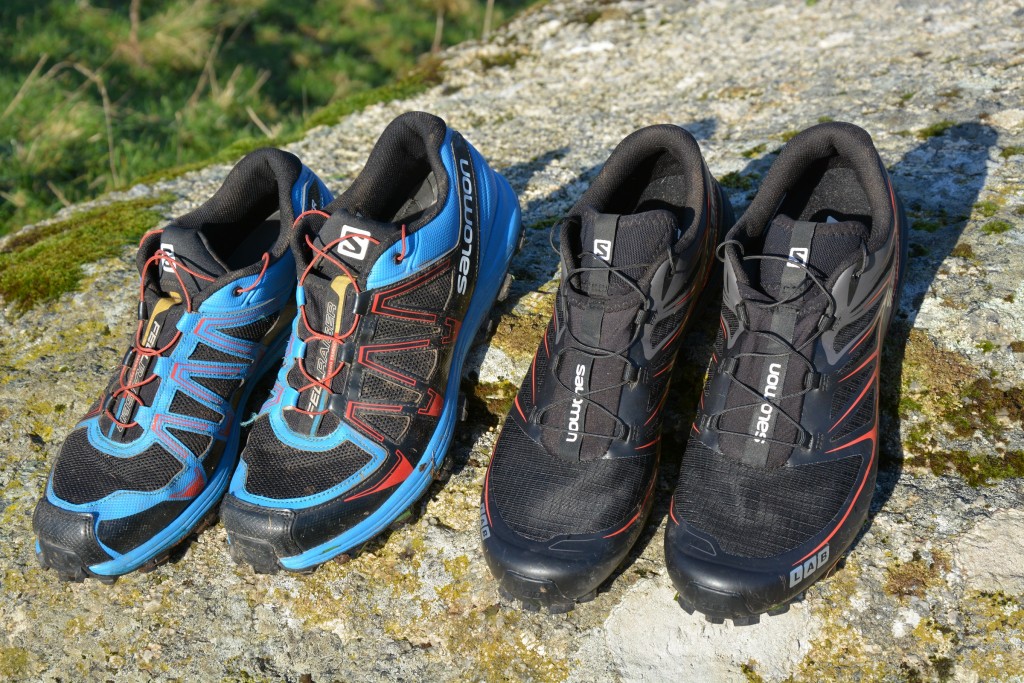 The uppers are where the major difference between these shoes is most apparent and I expect is the main reason that the S-Lab Speed is considerably more expensive. They’re both designed as breathable, quick-draining shoes, so neither has any waterproofing. The Fellraiser is constructed from different panels of synthetic material and mesh sewn in layers over each other to combine structure, protection and breathability. The heel cup fits well and is supportive. In contrast, the Speed uses thinner fabrics which are bonded together to minimise seams. The rand which wraps around the base of the shoe and reinforces the lace points actually appears to be printed or glued onto a base of dense mesh. This creates a smooth outer which doesn’t catch on vegetation and also sheds water and mud well. Both models feature a mesh cover over the tongue to reduce the ingress of debris.

Both shoes use Salomon’s Quicklace system, with three sets of speed lace points and traditional lace holes at the top. The lace and clip appears to be the same on both shoes but the Fellraiser has a rubber puller at the end of the laces which is more comfortable to pull but a bit bulkier and ever so slightly heavier; I think it’s a good example of the design brief behind the two shoes: the Speed is minimal race spec and the Fellraiser leans a bit towards comfort. The lace system works well, one quick pull tightens them up and then you simply tighten the toggle to keep them at your desired tightness and tuck the toggle neatly into the tongue pocket. The integrated ‘Sensifit’ lacing system works best fairly tightly-laced.

The Speed’s techy features continue inside the shoe, which is lightweight and seamless with Salomon’s super comfortable Endofit system. This inner sleeve hugs the foot, creating a very supportive and sensitive interaction between foot and shoe. It also makes it even harder for any debris to get in. The Fellraiser has a more traditional construction; the tongue is attached to the mesh in the upper so it doesn’t flap around or move but it isn’t then also attached inside the shoe. There are some seams inside the shoe but I had to find them with my hand – I’ve never noticed them with my feet and I’ve never had any rubbing. There’s definitely more cushioning built into the Fellraisers, particularly around the heel and in the tongue. It does make them feel nice to put on and gives me confidence that they would still comfy after several hours.

To sum up, I really like both of these shoes. If you can splash out on both (it’ll be twice as long before you need a new pair) they complement each other really well. I’ll mainly train in the Fellraisers for their comfort and race in the Speeds for their… well… speed. They are lighter and they feel faster, grippier and more technical, but have a price tag to match. Overall two more great pairs of shoes from Salomon. 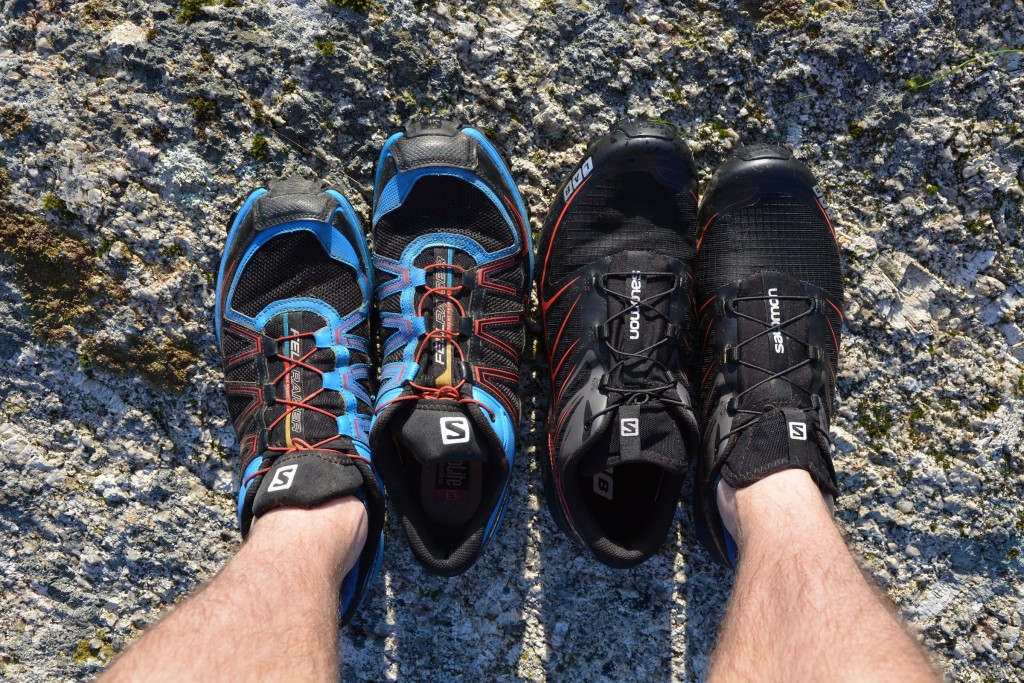 Related Posts
Wild Running with the Forestry Commission
Wild Running in the Forest As part of our continuing mission to find the very…
Top Kit: Women’s Winter Running Gear Review
Winter clothing choices can be tricky for runners: freezing when you start out, but before…
Run of the Month: Bolt Tail, South Devon
As part of our Wild Year of adventures we've spent the last couple of months…