Where land meets sea, a perfect place to play

Last week after I finished work I decided to go for a quick explore. My mode of transport was my feet and as time was tight and the light fading (it was March after all!) my method was running. The location I was off to explore was Woody Bay and if I was quick and my legs and lungs could cope I reckoned I could do the circular route from Heddon Valley (http://www.nationaltrust.org.uk/article-1356403558255/) before darkness enveloped the trails. 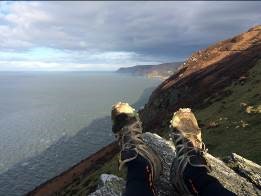 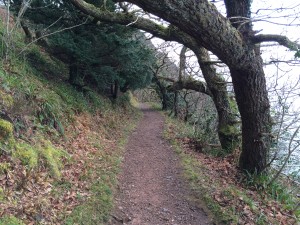 The run was so much fun, quite undulating, and the scenery was breath-taking (maybe the hills helped too). As it was a clear afternoon I could see the coast of South Wales in the distance and an array of wildlife including what I think was a Razorbill (I couldnt take my eyes off the trail too long to be sure!). On a few occasions when the hills were too much, I stopped to take in the view and get my breath back and was amazed that apart from the crashing of the sea many hundreds of feet below and the birds I couldn’t hear a soul. My destination was Woody Bay, one of the first coastal acquisitions in the South West that was bought as part of the Neptune Campaign some 50 years ago. During 2015 we’re celebrating the 50th anniversary of the Neptune Campaign which was created specifically to protect the coast.  One of the many achievements of this inspirational project is that it has enabled us to acquire and protect more than 700 miles of UK coastline, 300 miles of which are based here in the South West.

On my way back, after a quick look around Woody Bay (it was a bit chilly to try the old Victorian swimming pool) I was left to ponder what the coast would be like if the Neptune campaign hadn’t been a success and people hadn’t so generously supported it.  Would I be running through ancient woodlands, exploring secret beaches and playing on wide expanses of sand? Whilst I was mid thought I was snapped back to reality as the heavens opened and I was battered by a brief hail squall that I had been watching for some time out at sea. The rain focused my attention back onto the sinuous trail beneath my feet and I pushed hard for home. Once back at the car park, amongst people, buildings and the hum of human existence again I smiled and thought what an adventure I’d just had. I’d seen waterfalls, a Victorian carriageway, an old Roman Fort, loads of wildlife and another countries coastline. 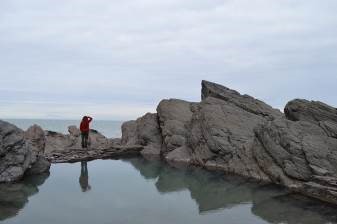 The coast has always been a place to play for me and although I may have changed how I’ve played over the years it’s been an ever constant. In my early years as seen below it was all about messing about on the beach, digging holes, building sandcastles, paddling in the sea. The smiles and excitement are still there, albeit now my pleasure comes from surfing, running, swimming and walking the dog with my wife………..although I’m still a fan of building a sandcastle, that never grows old! 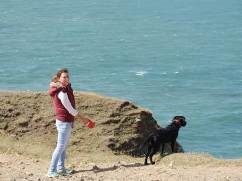 I’m very fortunate in my role as General Manager of the North Devon Coast and Countryside team to be working in such special locations and with a great team to play our part in looking after them for ever, for everyone to enjoy.  The coast is an amazing resource and one we must all look after so that future generations can play and enjoy the pleasures that I’ve been lucky enough to have whether it be walking, running, bird watching, sandcastle building or eating sandy sandwiches!

For more information on a range of events to celebrate the coast checkout –http://www.nationaltrust.org.uk/visit/local-to-you/south-west/things-to-see-and-do/north-devon/ there is even an event following some of the route I mentioned to Woody Bay.

Words and photos by Rob Joules.

Related Posts
Wild Running with the National Trust
Top 7 National Trust places to go wild running in the South West The National…
Run of the month – Fountains Fell
Our featured run for August heads to Fountains Fell in the beautiful Yorkshire Dales National…
Nominated for the 2017 Running Awards!
We're delighted to have been nominated in the Best Book category at the 2017 Running…

This article has 1 comments